I’m invited to join Tim on his annual salmon fishing trip, this time with Mike and his son Owen Cleary. We all convene in Anderson Sunday night at the Gaia Hotel & Spa. Have a great dinner at the Woodside Grill. After dinner, we reminisce about our epic trip to Ireland with my old photo album.

The next morning we’re off to Corning to fish with Steve, a guide that works with Dave Jacobs. Owen lands the first salmon of the day and his first. I’m handed Steve’s rod after he gets a fish on and I land my first Striped Bass. Mike is next hooking up a big salmon. He fights it all the way to the boat and as it slowly emerges at the surface it somehow loses the hook and is gone. Some discussion follows that perhaps Steve should have netted that one. Am glad it didn’t happen to me. These guys are great fishermen and when they lose one it’s a tough break. If I lose one, well it’s pretty clear I screwed it up.

Day two is with Mike Bogue, Tim’s usual go-to guide. We meet Mike early in the shopping center lot across the freeway and follow him to put the boat in. We’re on the river by 6:30 am and off to the usual spot called the Barge Hole. There are already about 10 boats there. As usual, Mike gets us set up and it’s not long before Owen lands the first Salmon of day two. I think fish two is boated by Mike Cleary, another nice salmon. Soon Tim lands the largest so far.

We try a few other places. I commit my usual rookie mistakes. I forget to keep my thumb on the line, I get tangled with Owen’s line, I somehow get my line around the boat prop. (not sure how I keep getting invited back to these but am grateful for everyone’s patience). At one point I have a fish on and am fighting it to the boat but lose it before we ever see it. I ask Mike what I should have done differently. He pauses thoughtfully and replies “Hook it better”. I don’t think I even set the hook, just all of the sudden noticed I had a fish on and started reeling. DOH!

Towards the end of the day, Mike snaps his rod back and hands it to me. I proceed to reel in a really nice salmon to make it one for each of us. Mike takes the boat to a shady spot where he ties up and fillets our catch for us.

This was another amazing trip organized by Tim and a wonderful reunion with the Clearys. So much fun, I don’t think I’ve laughed that much in a long time!

Have had so much fun fishing with my brother Tim over the years but catching a bass has completely eluded me. We’ve killed it on trout, catfish, kokanee, and salmon but I was yet to ever land a bass. Well our last fishing trip his boat was temporarily out of commission so we decided to go old school and rent an electric motor powered small row boat and try Lake Chabot. We trolled around for trout but no luck so we went off into a little offshoot and tried casting for bass near some likely spots. Eventually we decided to try an area bounded by reeds that was almost a perfect box. We anchored and not long after casting to the periphery Tim landed a little bass. Well after that we proceeded to hook seven bass and landed six. I somehow got my big one off just as we were trying to net it.

Was another great time with Tim and now I can say I can add large mouth bass to my fishing resume! 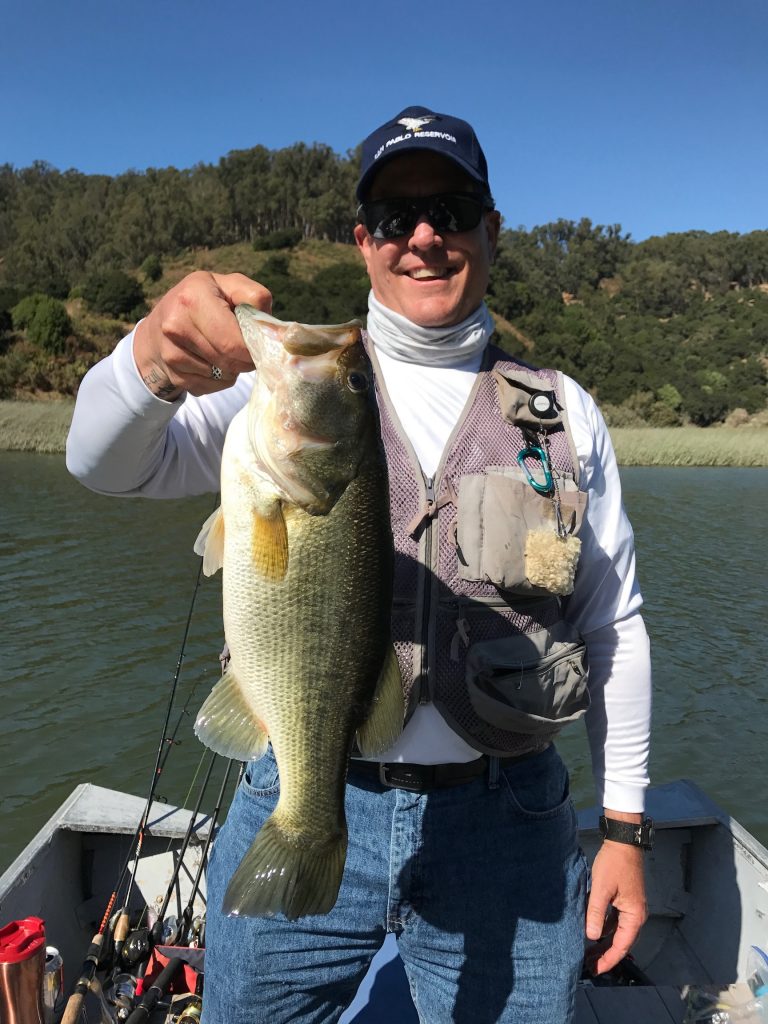 Tim with bass at Lake Chabot 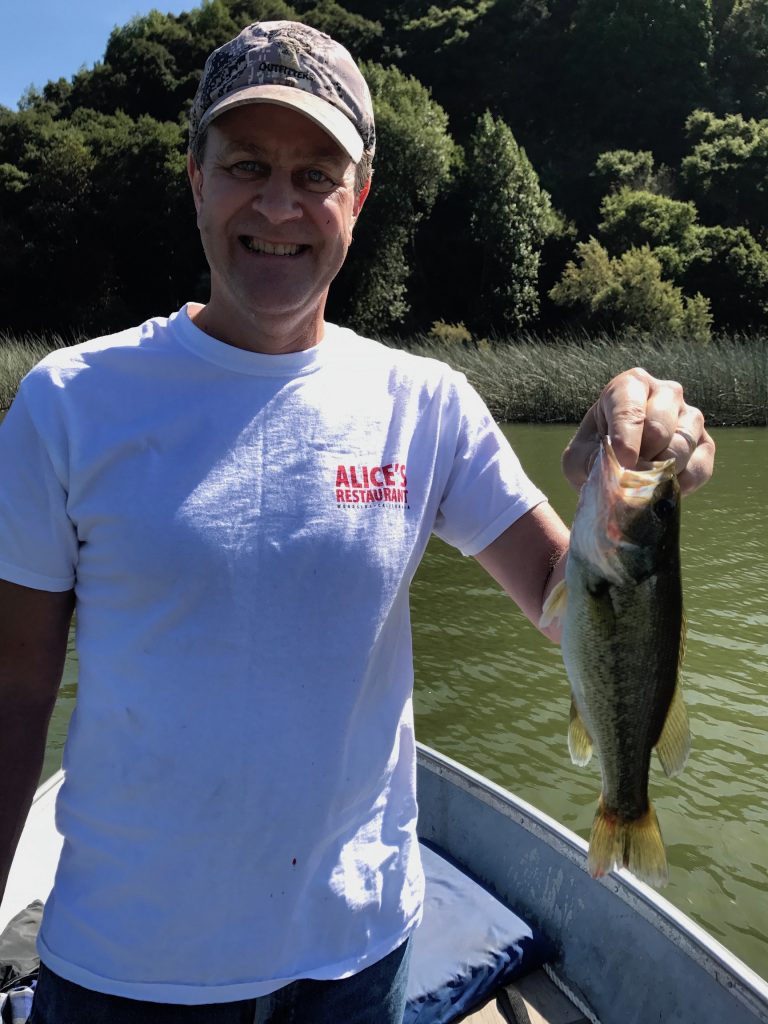 My brother Tim is an avid fisherman, has his own boat, and I’ve had lot of fun over the years fishing with him and learning about fishing. Each year he does a guided salmon fishing trip with guide Mike Bogue on the Sacramento river. This year he invited me to join him. I knew this would be a great time and we had a chance at catching a big salmon but had no idea just how exciting and how great we would do.

We headed up to Anderson Sunday night for an early meet up with Mike at a nearby lot and then off to the boat ramp. In the water before sun up and started at a popular spot where Battle Creek joins the river. Already there were probably 10 boats working the spot. We set up not too close to the armada and back trolled our T155 lures into position. It took me a while to learn how to make sure the lure was working and to feel the bottom and then gently bounce the lead round ball sinker to keep the baits moving as the boat slowly worked them down the river current.

Hooking them is a definite skill as they first may gently pull on the bait and the second stronger pull is when you set the hook. I felt a few bites but I never managed to hook one. Mike however is a master and minutes into our first day he yanks his rod back into a deep bend, turns and hands it to me! After my initial surprise I got to work and reeled in a beautiful female salmon. I was amazed and I think the rest of the fleet were too as they watched us come late and just hook up and land our first fish.

Then it just kept getting better! 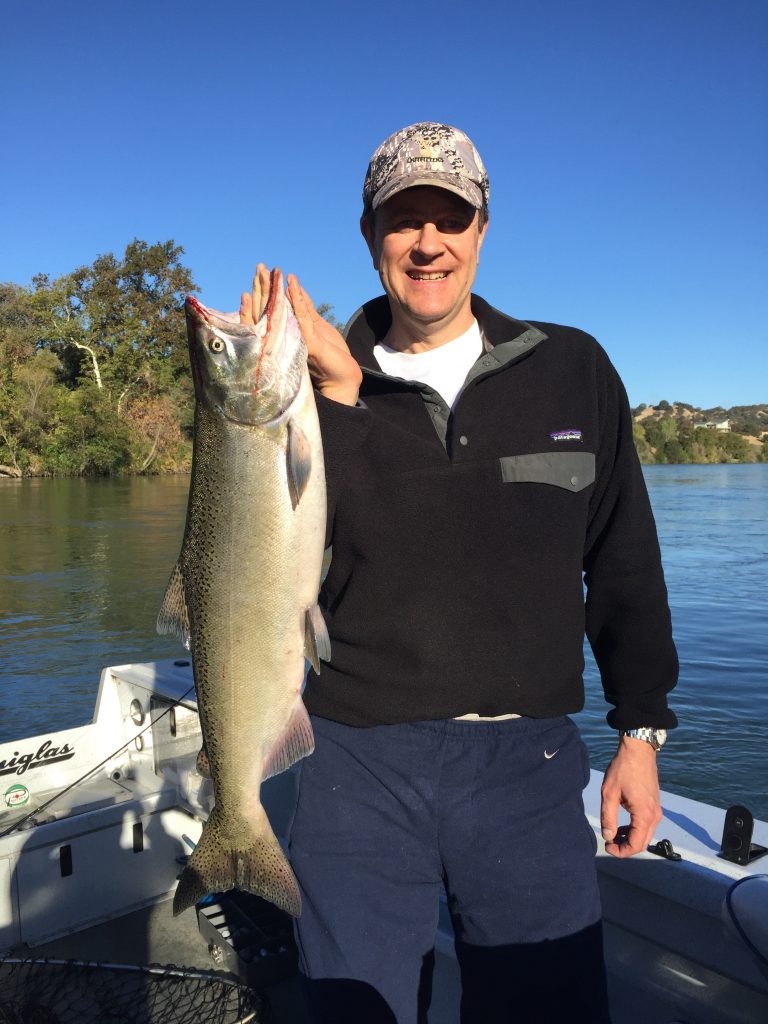 First fish of the trip

We would fish a while and then Mike would have us reel in. Mike would freshen up our baits, adding a filet of sardine to the big lures. We fished a while and then moved down the river to a scenic spot all to ourselves. Soon Tim hooked his first fish and it was a big one. Tim has the drill down and lands his like a pro. 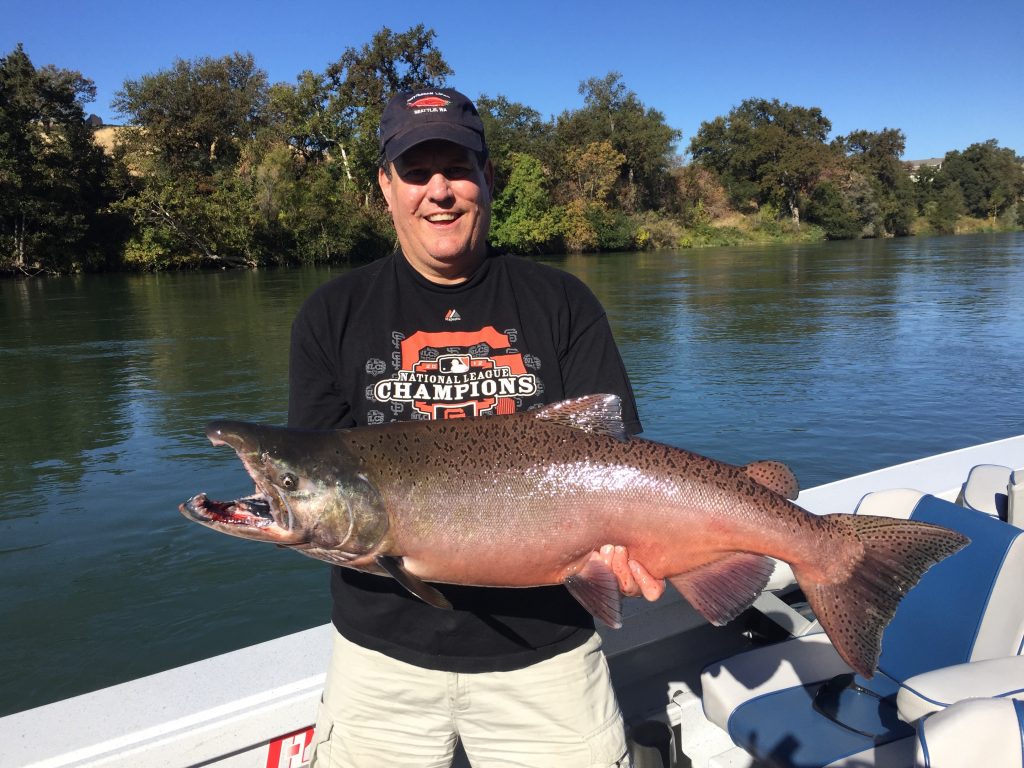 My second fish of the day turned out to be a big male and it was a fight to get him landed. I would reel him in close to the boat, up to the sinker, lift up for Mike to net him only to hear my line going out as he makes another run. Finally I got him up and in position for Mike to net him. Incredible fight and the biggest fish I’ve ever caught! 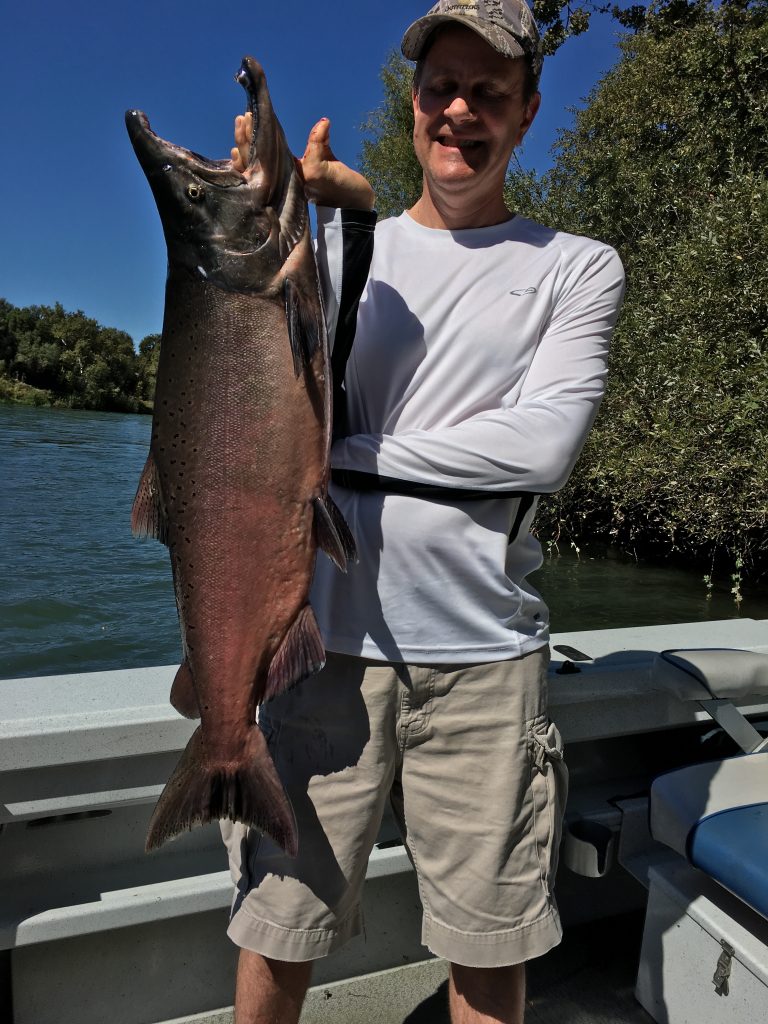 Tim would finish the day with a nice female. Another big fish to cap of an incredible day with us both getting limits of salmon. 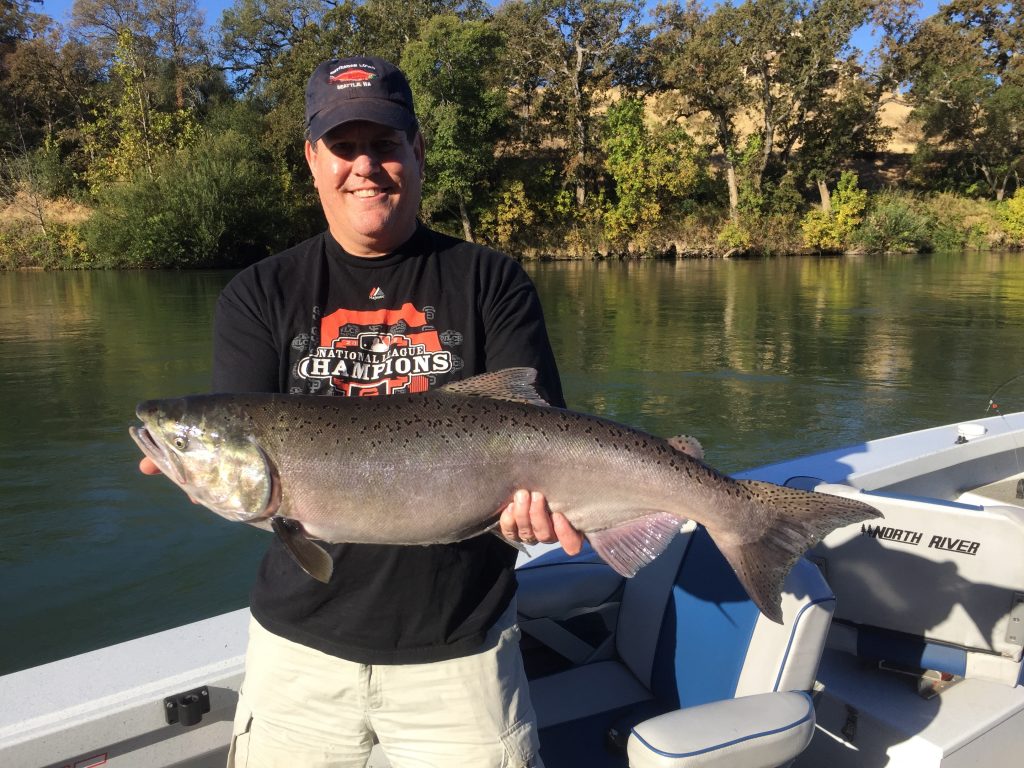 After catching our limit we headed back to the hotel, enjoyed some time in the pool and then a great dinner at the Woodside Grill. The Gaia Hotel in Anderson is very nice, super convenient and the grill just a short walk away.

We’re back to meet Mike first thing in the morning. This time we didn’t fish for long with the crowd but headed back to some other spots that had been so productive our first day. Shortly after dawn Mike yanks back his rod and once again hands it to me. I get to start day two landing a nice male. 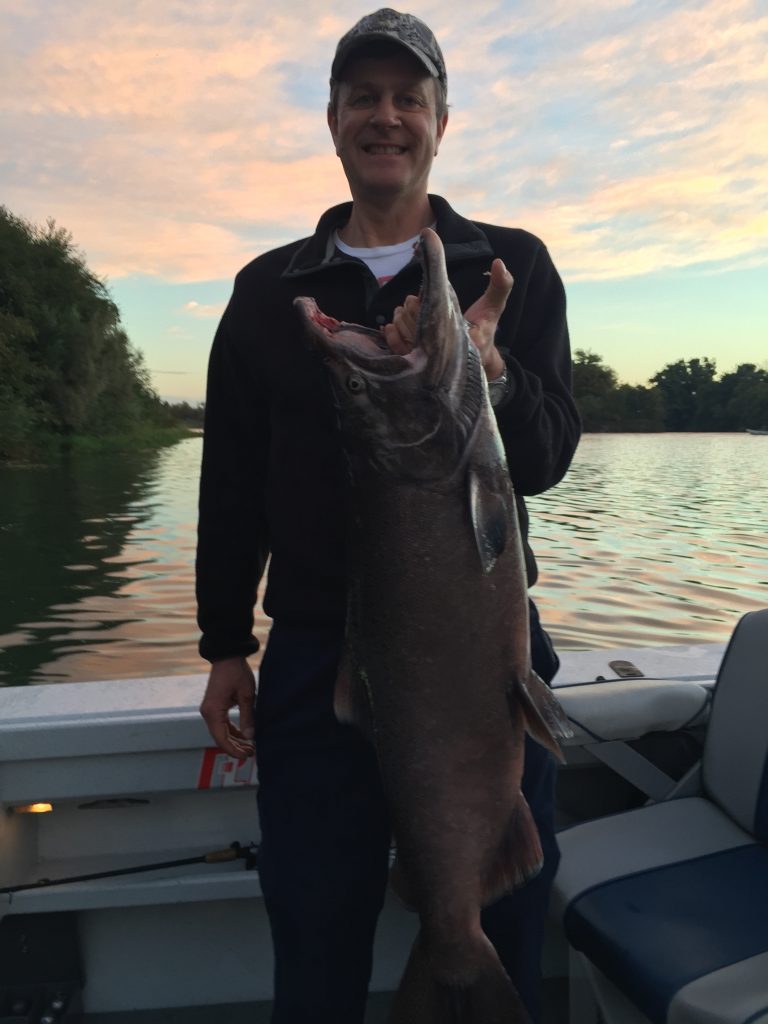 Day two would be even better with us landing fish after fish. Tim and I both land a male and female each with some big ones. We had our limit by 10:30. Mike ties up in a nice shady spot and fillets the catch for us. Tim and I are heading back to his house in Walnut Creek where we put his vacuum packer to great use packaging some for his smoker and many many dinners. 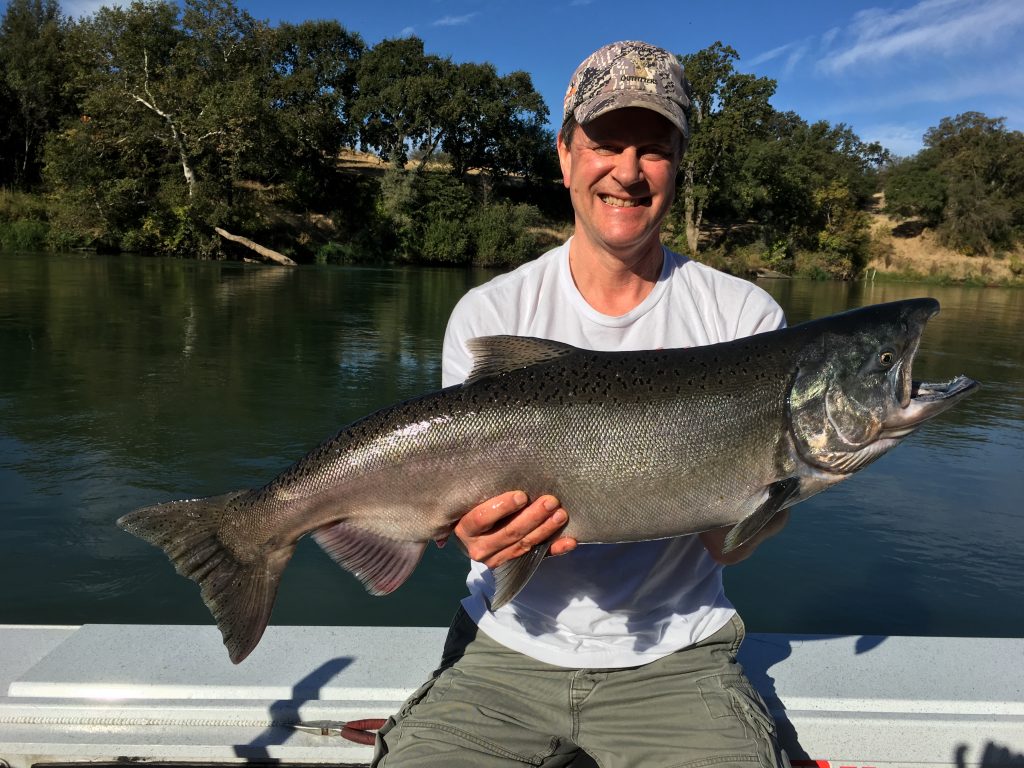 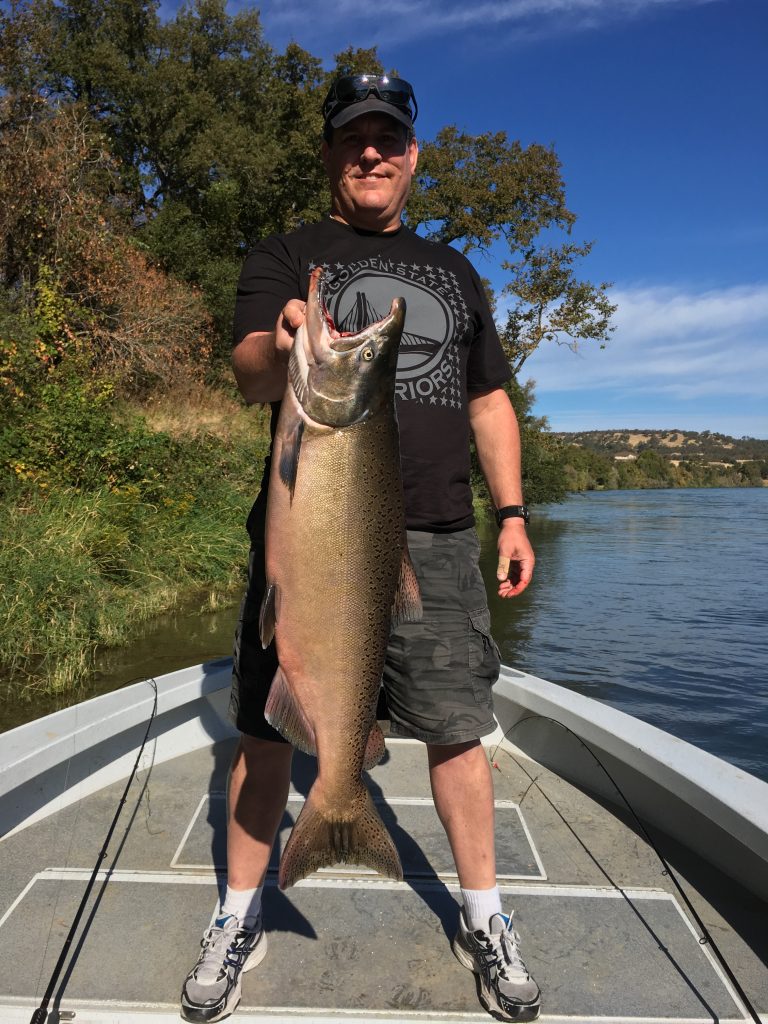 I’ve had lots of great memories fishing with Tim. Pulling in trout after trout in some host spot on the lake or landing catfish in the summer. Nothing compares to landing these huge salmon. Definitely the high point of my fishing experience. Makes me want to pack some rods next time I head out on the kayak and maybe do some line fishing after I’ve collected some abalone!